A loop down the Aveyron Gorge

Part of what I want to do with this blog is give a flavour of some of the rides you can do from here.  This ride is popular because it takes in some of the best scenery this part of France has to offer, is really varied and doesn’t have too much climbing.  It also means you get to see the best of the Aveyron Gorge.

It starts, as all rides here do, with a quick clatter over the cobbles of the old town but within a minute or two you’re on the Aveyron bridge with great views in both directions and the cliffs of the Rocs d’Anglars towering overhead.  We turn right down the gorge on what passes for a main road in this neck of the woods on a flat road running alongside the tranquil Aveyron river.  This road was a railway until the early 1960s, which is obvious as you pass the old station, so it makes for a great warm-up because there are no hills at all, and thanks to a quirk of the region, rarely any wind.  The awe-inspiring cliffs of the Cirque de Bone quickly close in and a choice presents itself.  I usually can’t resist swinging left onto the old Aveyron gorge road, even though it adds climbing and distance.  The railway had to miss this section of gorge out and tunnels through a cliff face instead, but the old road follows this impressive meander where the cliffs rise sheer from the side of the road and ancient oaks line the river.  There’s also a very mellow café, but even I can usually manage to resist a stop so early into the ride.  The road then climbs up the gorge wall, eventually inching its way along a sheer drop on a ledge carved from the rock.  Then there’s the descent back to the main road which passes a sleepy medieval village (complete with legendary restaurant) and a short flight of hairpins. 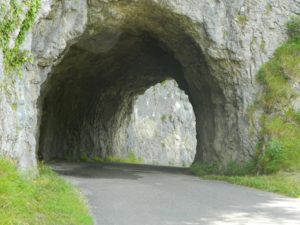 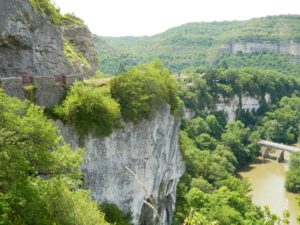 We’re back on the main road where the miles tick past easily, but there’s always something to look at.  There are the melting cliffs beloved of rock climbers and rare bird life, a couple more tunnels and before long the impressive ruins of Penne chateau perched on a cliff high above the road.  The village itself is a little way off the road but a worthwhile detour.  While Penne attracts tourists, it’s mainly a place to live, and the medieval buildings reflect that.  Some are beautifully restored, some distinctly shabby and some in ruins.  You might even see Derek Jacobi wandering the narrow streets; he’s lived in Penne for many years. 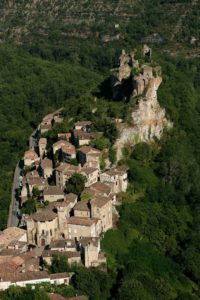 A few km further down the valley is Penne’s more image conscious twin, Bruniquel.  Like Penne it has a chateau high on a cliff overlooking the river surrounded by a medieval village.  Unlike Penne every building has been restored, and it only really comes to life in summer when the tourists arrive.  It’s a tourist draw for good reason though; the narrow streets are endlessly beautiful and it’s hard to imagine a nicer coffee stop.  Well, it would be nicer if it wasn’t at the top of a hill I suppose. 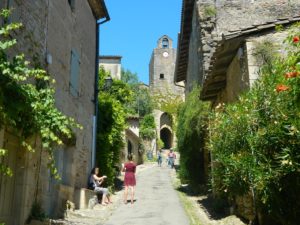 We now turn off the Aveyron gorge road and head up the Vere valley.  It’s much greener and less wild than the Aveyron gorge, with gentler hills and intensely green fields all around.  For the energetic, the hilltop bastide town of Puycelci is off to the left up a dead-end road, but for the rest it’s an easy spin up the valley, through picturesque Larroque to the gentle climb up to the lunch stop at Castelnau de Montmiral.  Were Castenau almost anywhere else in the world it would be a huge tourist draw with its perfectly preserved medieval square and surrounding streets, but here in Southwest France it’s a sleepy place where not much ever happens.  It’s a great venue for a leisurely al-fresco lunch though, and it’s nice to start the afternoon with a descent… 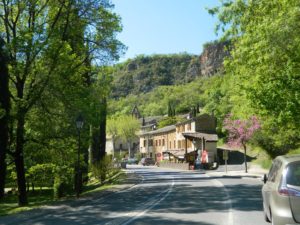 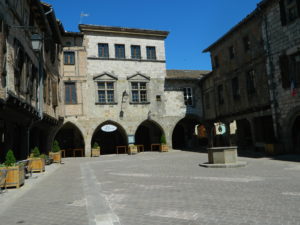 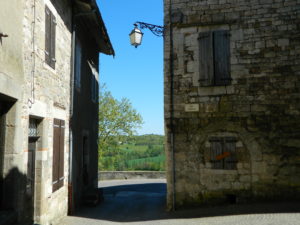 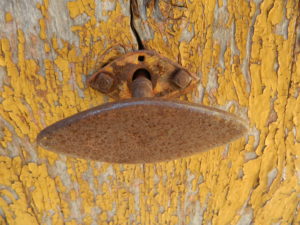 Castelnau is at the northern fringes of the Gaillac wine producing region.  Almost unknown outside the region, it’s France’s oldest appellation, and also, arguably, its most diverse.  There’s no single identifiable Gaillac style and several unique grape varieties are used.  There are several really superb vineyards on the route which are worth a stop – my favourites are Mas Pignou and Emmeille, but it’s always worth trying others – there are hidden gems around every corner. 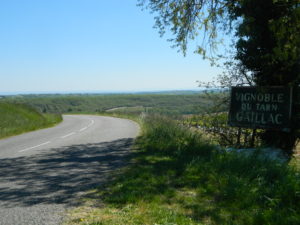 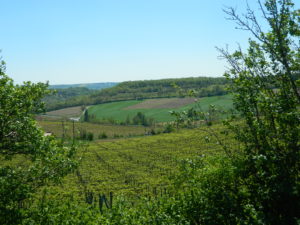 The only significant climb of the day takes us up through the vineyards to the forested hills above St Antonin.  The gradient is gentle and the views fantastic, so it’s nothing to be worried about!  We pass through the somewhat scruffy village of Vaour, a local stronghold of the Knights Templar in centuries past, but now known for one of the biggest arts festivals in the area.  For the rest of the year it’s very quiet, but look carefully and you’ll see people hard at work building eco-friendly houses which is a rare thing in rural France. 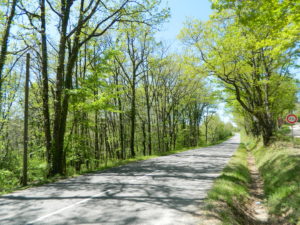 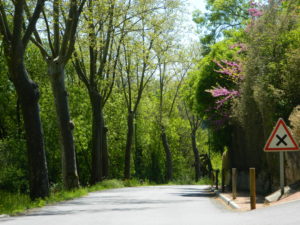 The grand finale of the ride is the descent back down into the Aveyron gorge into St Antonin.  It’s not especially steep but it’s fast.  Don’t forget to take in the views though, and it’s worth stopping at the top to really appreciate it.  If you have any energy left, there’s a short (uphill) detour to an even better viewpoint from the top of the cliffs. 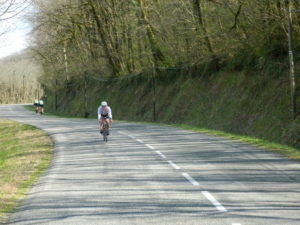 The route is 80km with 1000m of climbing.  Missing out the Cirque de Bone and Castelnau halves the climbing.

We have lots of trails with dry stone walls on eac

We do doors with patina well in these parts. #pa

I woke up this morning to a very nice surprise - I

I was just wondering why this field is full of sto

Oh dear today's second half of my microtour didn't

For #throwbackthursday here I am on a very chilly

I had assumed there were no decent pics of my rain

This ruined water mill is a long way from the near

I don't wear shorts till it reaches 20 degrees, an

Almost home as the sun starts to set #cyclinglif

If you saw us on TV last week, you'll know we've b

When the weather improves i've got a little projec

It was third time lucky for me today. I've had 2

Today the weather was absurd, worse than January,

View all our Cycling Vacations