When we set up St Antonin Noble Velo, we realised early on that we’d need really high quality bike hire, but also that we didn’t want to run a bike hire company.  Lots of our customers told us that bringing their own bike was a hassle, cost money and there’s the ever present risk of damage.  We believe in concentrating on what we’re good at and getting specialists in to deal with the rest.  Peter isn’t too keen on fixing bikes – he’s more about the riding, so finding a good hire company was the way to go for us.

That’s easier said than done outside the well known cycling areas.  You can hire a cheap mountain bike from pretty much anywhere in France, but high quality road bikes are harder to find.  We couldn’t believe it when we stumbled across Simon at Velo du Lot, who had exactly the quality we were looking for, is close enough to deliver, and what’s more is a really nice guy.

Simon’s quite a recent convert to cycling after seeing Mark Cavendish win the stage into Brive in the 2012 Tour de France, with Bradley Wiggins in yellow.  He started, as so many do, by dusting the cobwebs off his old mountain bike, but quickly graduated to a versatile Cyclocross bike, followed by a very flash Di2 equipped Giant Defy.  He was quickly hooked, splitting his riding between Cahors where they have a holiday home and Derbyshire where they live. 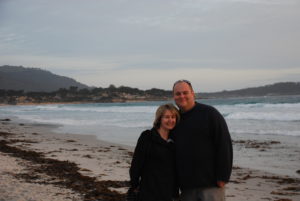 Simon and his wife Giselle have a long history in this area, having bought a second home near Cahors 13 years ago, which they love so much they’ve been looking for an excuse to spend more time there ever since.  In 2014 they read an article in “France” magazine about a couple who’d set up a bike hire business in the Tarn, and thought it could be just what they were looking for.  Simon’s engineering background means he’s a natural with a spanner, so for him tinkering with bikes all summer long in the south of France is heaven!  Giselle got into cycling too, so it’s become a real family passion. 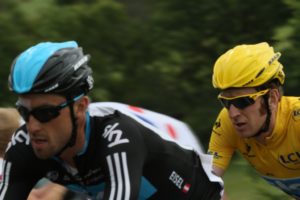 They looked into franchising deals, but after talking to the super-helpful relaxbiketours decided to go it alone, which turned out to be the right decision.  With a fantastic local support network from their years in the area, they were able to set everything up and even managed to deal with the nightmarish French bureaucracy we all struggle with.  The business turned out to be a really good niche, with rentals increasing every year.  Their gamble of buying really high end bikes (Pinarello Dogmas for example!) and maintaining them perfectly paid off – it turned out to be what people, including our customers, were looking for.

Simon also realised that people didn’t want to spend a big chunk of the holidays collecting and returning their hire bike, so he delivers and also offers “place to place” rentals for people doing longer tours.

For us, working with Simon is perfect.  He concentrates on getting the bike hire right, leaving us to get on with looking after our customers. 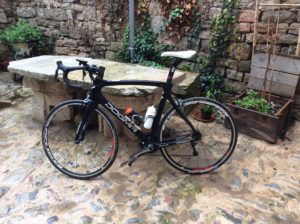 We have lots of trails with dry stone walls on eac

We do doors with patina well in these parts. #pa

I woke up this morning to a very nice surprise - I

I was just wondering why this field is full of sto

Oh dear today's second half of my microtour didn't

For #throwbackthursday here I am on a very chilly

I had assumed there were no decent pics of my rain

This ruined water mill is a long way from the near

I don't wear shorts till it reaches 20 degrees, an

Almost home as the sun starts to set #cyclinglif

If you saw us on TV last week, you'll know we've b

When the weather improves i've got a little projec

It was third time lucky for me today. I've had 2

Today the weather was absurd, worse than January,

View all our Cycling Vacations